Post your fishing report and pictures in this section

Today was a good day. I was joined by my son Mark and 7 yr old grandson Jack. The weather was fine and the tide benign.

After a discussion last night we set our sights on mooching the bay for species before heading to our favourite Tope mark.

We set out into the bay at 7.30am and quickly got into the Whiting. On went the livebait well and in went the Whiting. They’d come in handy for later. In the meantime we also found some small Tub Gurnard and a couple of Sandeel.

We moved on towards the next bay and found it full of Sandeel. We didn’t have the rigs to get into them. We just managed to snag the odd one or two. We did however find a few more Whiting and Gurnard as well as our first few Mackerel of the year.

We move on the our Tope mark and anchored up. It was slow to start with but we managed a few more Mack, better Whiting, Pollack and Dabs. Jack also wheedled out a Codling.

Finally, the 12-20lb class rod arched over. Something had taken the whole Mackerel bait. Jack stepped forward and began the fight (with a bit of support from Grandad). His hand was hurting and his arms aching but he wouldn’t give up the rod. Eventually, he was rewarded with his first Tope of the year. It was a decent size at around 30lb 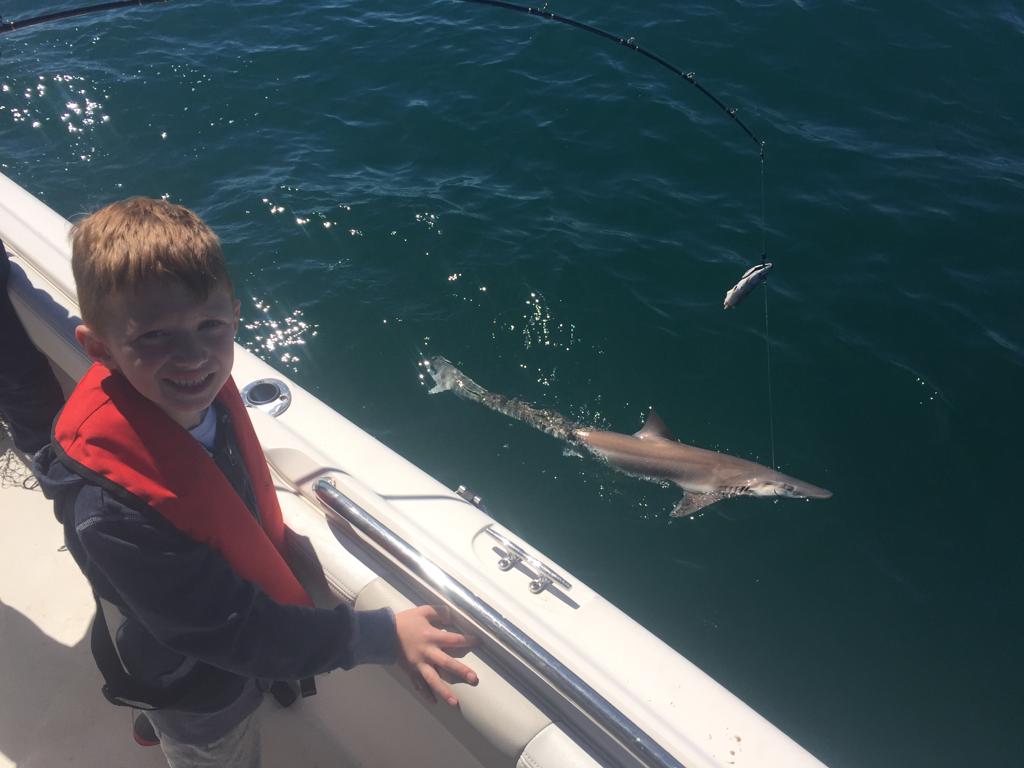 We Tee-barred it off at the side of the boat.

After that, he was quickly into a monologue about how many fish he’d caught. How he’d caught the biggest and widest variety . I don’t know where he gets it from

However, his dad eventually put him in his place. He got a good take on a livebaited Whiting and this fish stayed low and took him around the boat. It was a good scrap and Mark had to take his time. His reward though made it all worthwhile 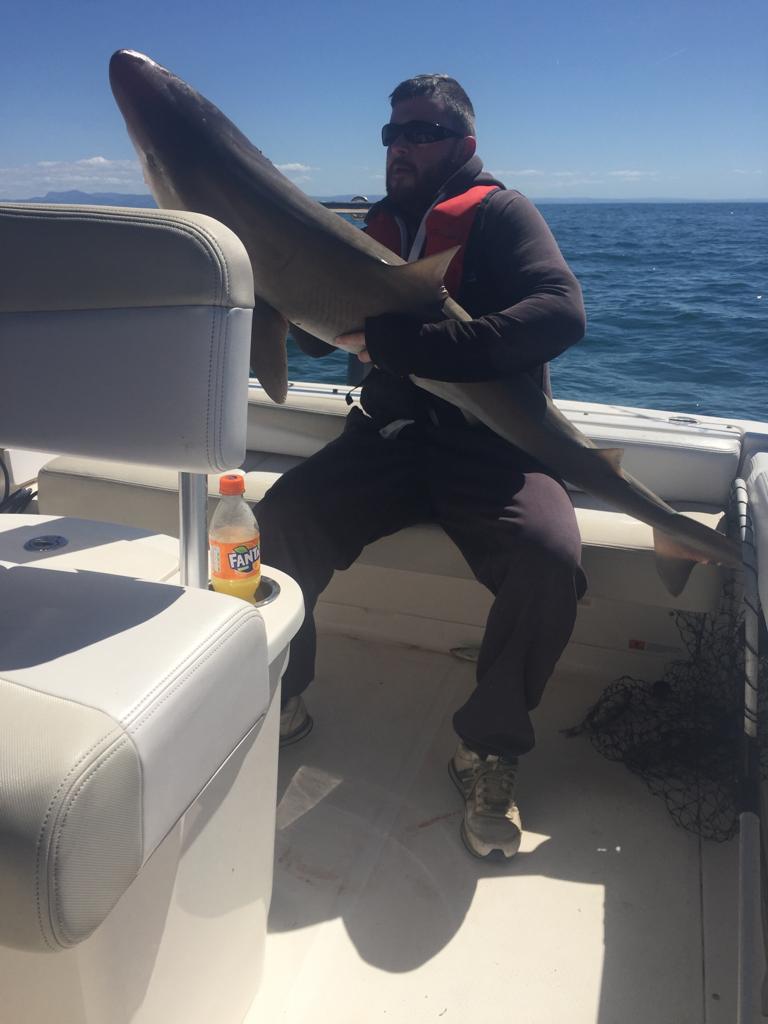 This was a proper big girl. We didn’t weigh her but she was a good 6 footer with a good girth on her. We reckon a good 50lber, maybe pushing 60. 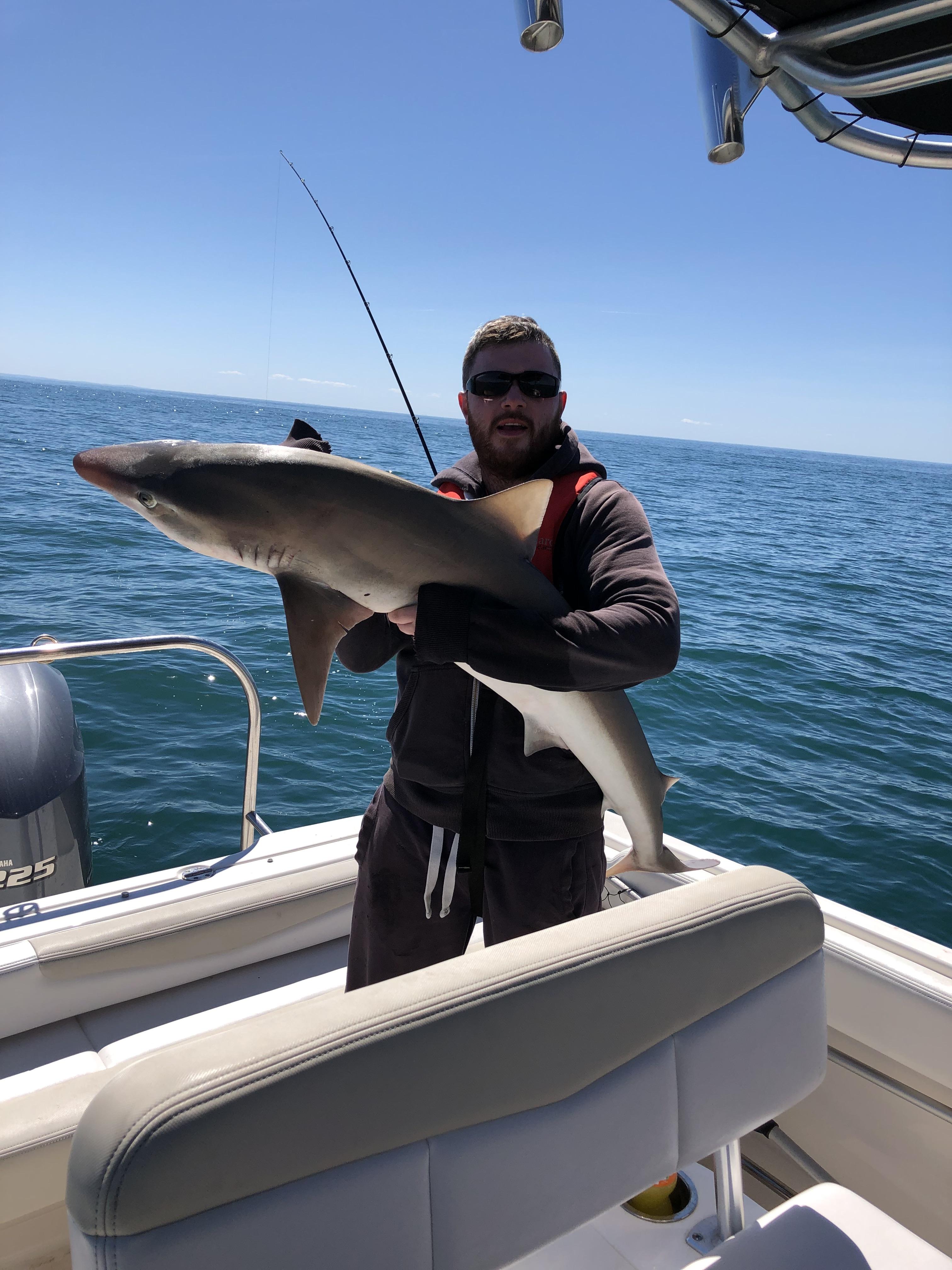 All to soon it was time to head back to the marina. With 9 species, two PB’s and a boat record Tope, it was been a good day.

Well done Everyone, I think we shall be seeing more of your Tope reports in the coming months Kev, a proper big girl that

Sea Fishing is the Dogs Danglies

High fives all round

Users browsing this forum: No registered users and 4 guests