I fell asleep in front of the Telly on Saturday night. It was because we'd had a great day out on the boat and loads of fresh air. It had nothing to do with the amount of lager and red wine I'd drunk

Sunday morning arrived all too quickly, and yet we were all still looking forward to another day afloat. We looked out of the caravan window. If Saturday had been calm, Sunday was ridiculous! It reminded me of being the first into the swimming baths as a young boy. There wasn't a breath of wind. We quickly devoured our bacon and egg sandwiches and nipped 'round the corner to pick up Lofty. A bit of a stop to refuel and the adventure began. We had high hopes for the first mark with Tope and Bream the quarry. With the water so calm we quickly covered the 12 miles to the mark, spotting a good size pod of Dolphins along the way.

Things didn't start so well, there were dogs aplenty, but we couldn't find the Bream or the Tope. We decided to move a few hundred metres along the reef, before sacking it for a return to yesterday "scene of crime". And the move paid off. It was immediately clear we were in a bit more current and whilst we still could find the Bream, John was eventually into a Tope. It fought well in the tide and Lofty soon tailed it into the boat for a quick photo-shoot. 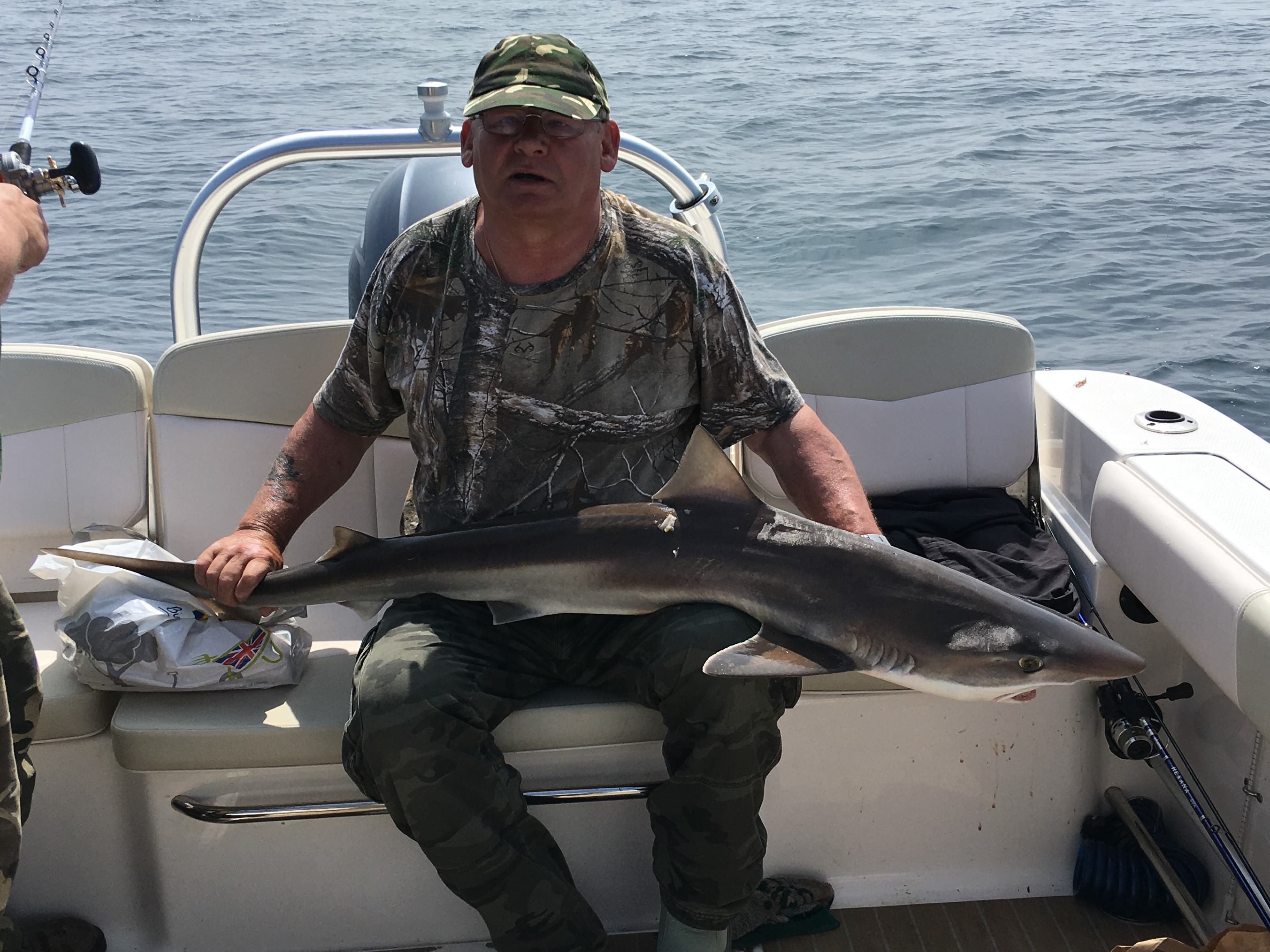 Colin was in shortly afterwards, with Lofty again doing the honours: 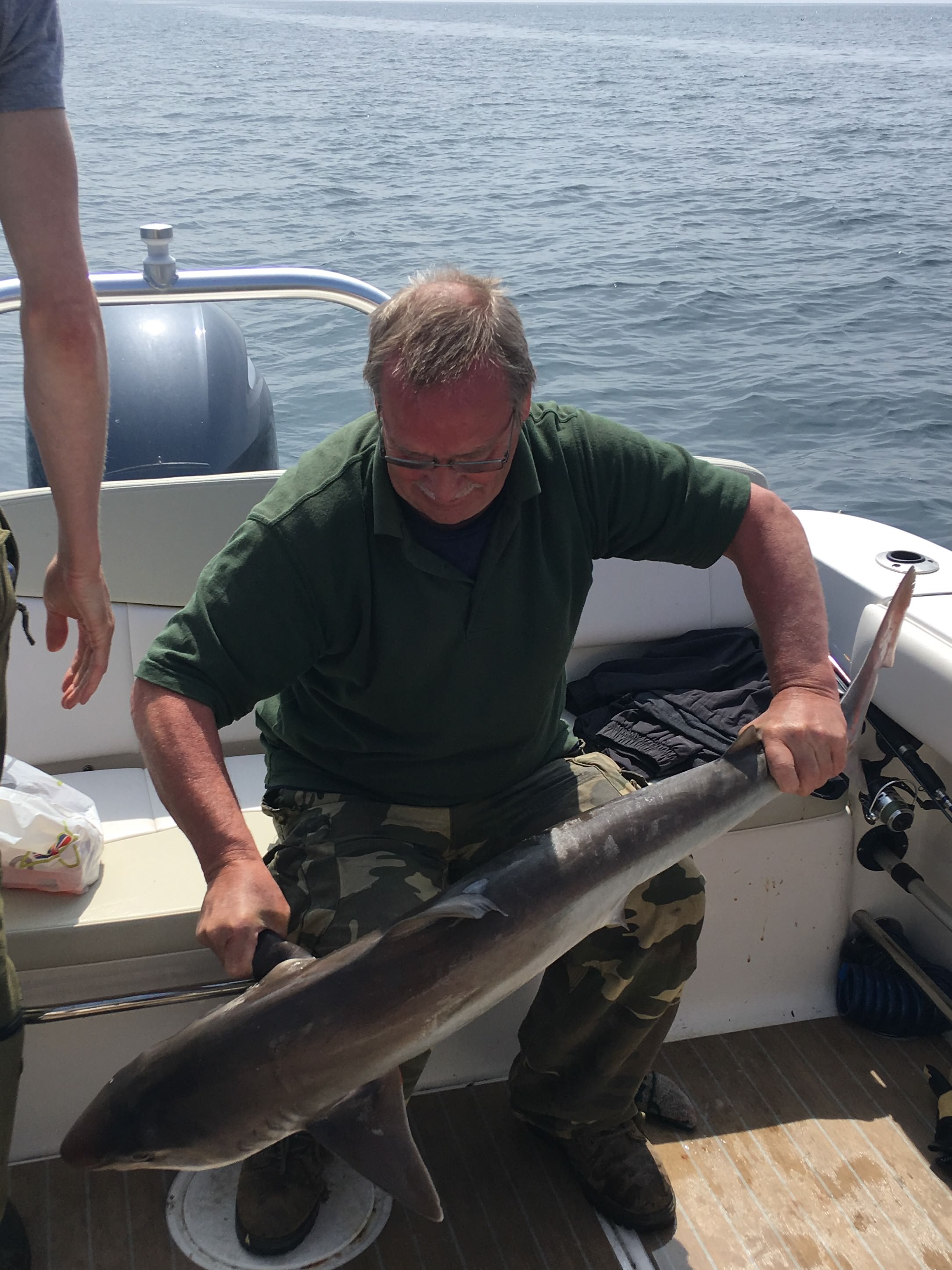 Next up, it was Lofty's turn. He brought in a Huss, quickly followed by a Tope. He quickly bought it to the side of the boat and I expertly .... dropped it! there was of course method in my madness as I felt it would spur him on to greater things. And besides, it was my boat and I hadn't had one yet

The fishing died after that and we surmised that the Tope pack had passed through and were probably heading inshore. We crossed the estuary 6 miles back to the previous days mark.

It was a little slow to start with but as the tide started to build, on came the fish. Once again there were Huss aplenty. I weighed on of the better ones out of curiosity it bounced the scales around at 12-12.5lb. There were plenty around this stamp and a few bigger.

John, Colin and Lofty all had more Tope.

The penultimate Tope was the best of the day and it fell to Lofty. Right from the outset, it was clear it was a better fish. Certainly bigger than the 25-35lb stamp we'd been getting. This one tore off. It had a few tricks up its sleeve too and it breached the surface 100m away from the boat, not once but twice., leaving us to speculate weather it might be a blue It took a while to get to the boat. I was quite miffed on the quiet. I rather like my boat, but every time Lofty got it close, it took one look at it and b*ggered off again! (mods - we need a "tongue on cheek" emoji btw!). Lofty finally got it to the boat and I reach over to try and grab it. It had another trick up it's sleeve though as it magically dived and turned Lofty's rod from a two piece into a three piece! Undeterred, he soldiered on (did you see what I did there Lofty ). "For Christ's sake don't lose this one Kev", he said. As if

He was quite knackered when he finally saw it, but I think he thought it was worth it. A new, female, PB of at least 45lb 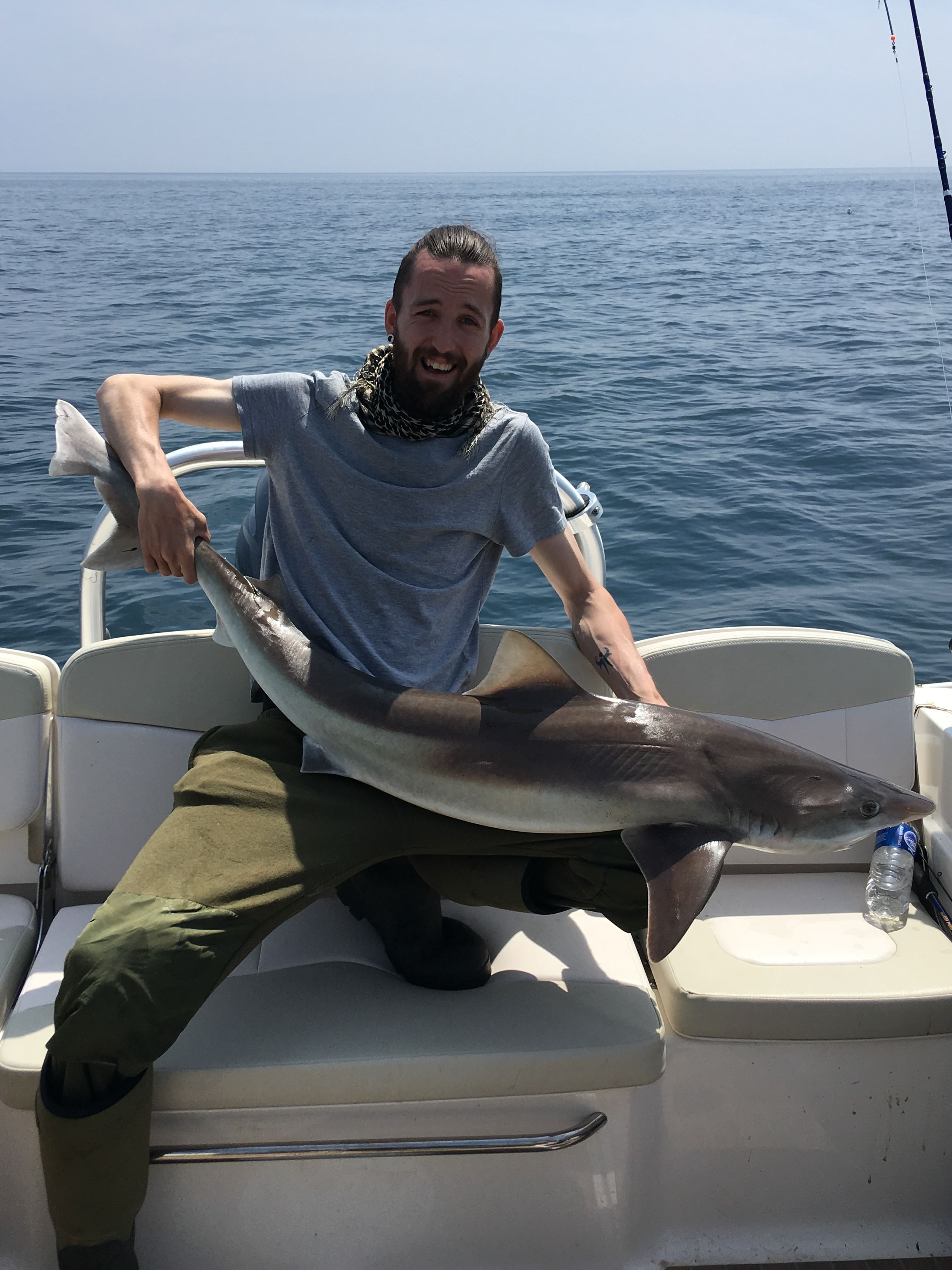 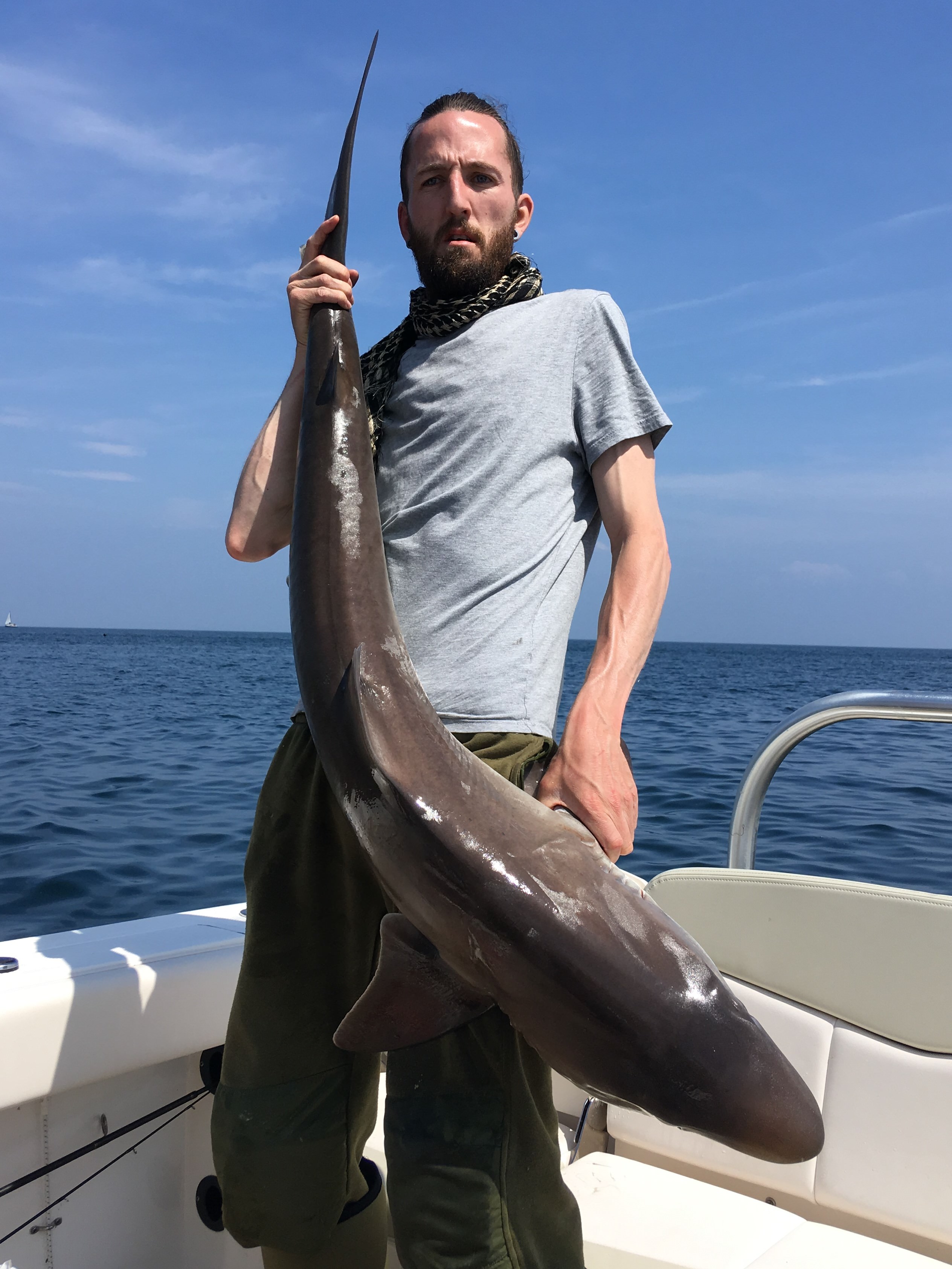 Lofty had one more after this, of around 35lb

And that was it. Time to go back to shore, clean the boat, and think about heading for home and the dreaded work on Monday.

11 Tope in total, countless Huss, a few dogs, Pollack, Wrasse and a solitary Sandeel. Loads of beer, 6 bottles of wine, rum, good weather, but most of all, good company. Unfortunately, I didn't get a Tope myself on Sunday. A fact that might have been mentioned once or twice.
Kev
Top

Sounds like you all had a great weekend. You must be a good skipper putting the lads on the fish and getting the pleasure of watching them catch the targetted Tope.

Cracking session there Kev. Good of you to stay off the tope to allow your crew to get in on the action. Matt looks a little unsure holding that 45lber

Users browsing this forum: No registered users and 2 guests